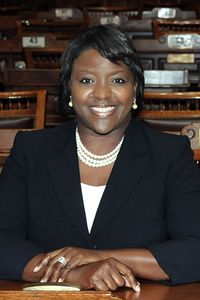 Tonya Anderson retired from the United States Air Force in 2012 after more than 21 years of service. Her community activism and volunteerism includes veterans’ services, senior centers and several civil rights organizations, including the NAACP. Prior to assuming her current Georgia Senate office on January 9, 2017, Anderson served in the Georgia House of Representatives, representing District 92 from 2013 to 2015. Anderson also was a member of the City of Lithonia City Council, and as mayor from 2008 to 2011, oversaw improvements in city housing and streetscaping. The recipient of numerous awards, Anderson holds degrees from Alabama State University and Luther Rice University.