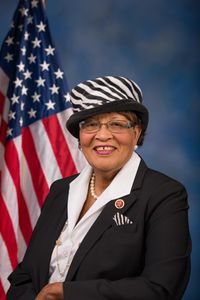 After winning a special election in November 2014, Alma S. Adams was sworn in as the 100th woman elected to the 113th Congress. Throughout her career, Adams has promoted quality education for all students, spearheaded numerous pieces of legislation to boost funds for Historically Black Colleges and Universities and inspired college students to vote. As former chair of the North Carolina Women’s Legislative Caucus, Adams has helped introduce bills to stregthen laws to protect children, women and women’s health and reproductive rights. Before her election to the North Carolina General Assembly, Adams served for nine years on the Greensboro, North Carolina City Council. Adams is a graduate of North Carolina A&T State University and holds a Ph.D. from The Ohio State University. She also was an art professor at Bennett College.