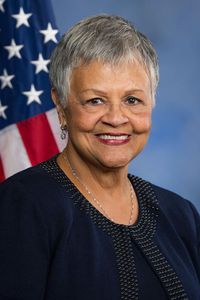 Bonnie Watson Coleman was the first black woman elected to the House from New Jersey, elected in 2014 to replace retiring incumbent Rush Holt Jr. (D), who had represented the district since 1998. Before being elected to Congress, Coleman was a Democratic member of the New Jersey General Assembly, representing District 15 since 1997. Coleman served as Assembly majority leader from 2006 to 2009 and was the majority conference leader in 2014. She was the first woman to chair the Democratic Party of New Jersey, holding the position from 2002 to 2006. Prior to serving as an elected official, Coleman worked for the New Jersey state government, including stints in the Department of Community Affairs and the Department of Transportation.