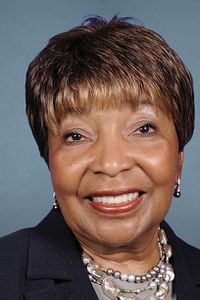 Eddie Bernice Johnson began her political career in the Texas House of Representatives, where she served from 1972 to 1977. She then served in the Texas State Senate from 1986 until her election to the U.S. House in 1992.
In December 2010, Johnson became the first black and the first female ranking member of the House Committee on Science, Space, and Technology. She is also the first nurse elected to Congress. Johnson passed the National Board Examination in Nursing and became the Chief Psychiatric Nurse at the VA Hospital in Dallas. Later, she served in the Texas House of Representatives and earned her bachelor’s in nursing and master’s in public administration. She went on to become a regional director for United States Department of Health, Education and Welfare before returning to politics.