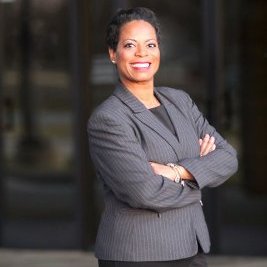 Erika Weaver found herself homeless with her three small children after enduring nearly a year of housing insecurity. Deciding to end her family’s cycle of poverty, she enrolled at Lake Land College in 2005 and earned an associate’s degree in Business Administration, and later earned a bachelor’s and master’s degree in College Student Affairs at another university. Weaver returned to Lake Land College as a faculty member and academic counselor. Dreams of becoming an attorney led her to the Loyola University Chicago School of Law. During her last semester of law school, Weaver ran for and was elected to the Mattoon CUSD2 Board of Education. After law school she worked with Land of Lincoln Legal Aid, as well as a part-time job in a local factory while studying for the bar exam. After receiving her license to practice law in Illinois, Weaver briefly worked in private practice before joining the Coles County Public Defender’s office.