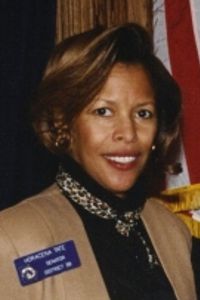 Horacena Tate is the Minority Caucus Chairwoman and currently serves as secretary for the Reapportionment and Redistricting committee. She obtained a Bachelor of Science degree in Education from the University of Georgia in 1977. After graduating, Tate began her professional career as an employee in the Georgia Department of Labor in 1977 She spent several years as an employee and trainer with United Airlines and Apollo Travel Services. To further her formal education, Tate enrolled at Atlanta University in 1987 and in 1988 received a Master’s degree in Educational Administration. She later received her Ed.D. in Educational Administration from Clark Atlanta University in 1992.