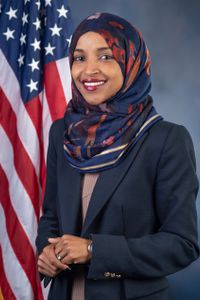 Rep. Ilhan Omar represents Minnesota’s 5th Congressional District in the U.S. House of Representatives, which includes Minneapolis and surrounding suburbs.  An experienced Twin Cities policy analyst, organizer, public speaker and advocate, Rep. Omar was sworn into office in January 2019, making her the first Somali-American Member of Congress, the first woman of color to represent Minnesota, and one of the first two Muslim-American women elected to Congress. As a legislator, Rep. Omar is committed to fighting for the shared values of the 5th District,  values that put people at the center of our democracy. She plans to focus on tackling many of the issues that she hears about most from her constituents, like investing in education and freeing students from the shackles of debt; ensuring a fair wage for a hard day’s work; creating a just immigration system and tackling the existential threat of climate change. Born in Somalia, Rep. Omar and her family fled the country’s civil war when she was eight. The family spent four years in a refugee camp in Kenya before coming to the United States in 1990s. In 1997, she moved to Minneapolis with her family. As a teenager, Rep. Omar’s grandfather inspired her to get involved in politics. Before running for office, she worked as a community educator at the University of Minnesota, was a Policy Fellow at the Humphrey School of Public Affairs and served as a Senior Policy Aide for the Minneapolis City Council.