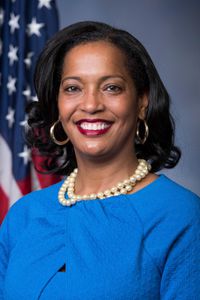 Jahana Hayes is the first African-American Congresswoman from Connecticut, and this is her first public office. A high school teacher, Hayes first garnered widespread notoriety when she was named National Teacher of the Year in 2016 by President Barack Obama. In her capacity as National Teacher of the Year, Hayes traveled the country and the world engaging public education stakeholders in policy discussions meant to improve outcomes for students. Hayes’ story is one of achievement despite the odds and overcoming the obstacles that so many people face. Growing up in the cycle of poverty and addiction, she found herself pregnant at 17. She had her daughter, went back to school, received multiple degrees, reached the pinnacle of teaching and now, sits in Congress. She credits education for saving her life. She decided to run for office when she looked at her students and said: “Who will speak for them, if not me?”