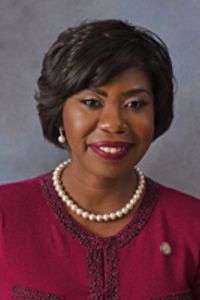 In 2018, Kamia Brown began her second term in the Florida House of Representatives, representing the 45th district, which includes parts of Orange County. She has been instrumental in drafting and implementing key legislative policy and serving communities from Jacksonville to Orlando to South Florida.  Kamia Brown currently serves as the School Liaison for the Central Florida Urban League (CFUL) Reading Program. Previously, Kamia was the CFUL’s the Director of Community Affairs and Development, where she oversaw the development and implementation of projects related to community and donor relations. Kamia brings over 15 years of experience in public and community service to the organization.  She earned her BS, in Political Science from Florida A&M University (FAMU).  A proud FAMU Rattler and passionate children’s advocate, she’s has been honored by state and local organizations for her service and partnership building. Kamia is also an active member of St. Mark A.M.E Church, The Links Incorporated, The Central Florida Urban League Young Professionals, The Orange County League of Women Voters and Junior League of Greater Orlando, where she serves on the Public Affairs Committee.