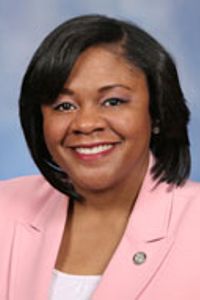 State Representative Leslie Love is serving her third term representing the 10th House District, which comprises Redford Charter Township and a portion of northwest Detroit.  Her slogan is “Always on the job. Always in the Community,” and Love’s commitment to and love for the district is evident by the ways in which she engages the community, including holding Coffee Hours, Legislative Updates, After Work with the Rep Dinners, community leader discussions, town halls and more.  In the first year of her first term, Love was the first woman, first African-American and first freshman representative in her caucus to introduce legislation that was signed into law as a public act (PA 68). Love has sponsored legislation on several significant bill packages, including the bipartisan Sexual Assault, Drivers’ Responsibility, Juvenile Justice Reform and End of Life bill packages; Civil Rights bill package, Michigan Credit Union Act package, Pay Equity and Reproductive Rights packages. In addition to her committee assignments, Love has served as the Democratic Caucus vice chair, 2nd vice chair and chaplain for the Michigan Legislative Black Caucus, treasurer of the Progressive Women’s Legislative Caucus, and on the Greater Wayne County Caucus. Before her election to office, Love was the director of theatre operations and adjunct professor at Marygrove College for 12 years. She was a professor for Wayne County Community College District as well. In her spare time, she pursued her avocation as an actor, playwright, and stand-up comedian. Love was born and raised in Michigan. She grew up in Detroit, attended Detroit Public Schools and graduated from Cooley High School. She earned a Bachelor of arts from Siena Heights University, a Master of fine arts from Wayne State University and a Master of arts in human resources management from Marygrove College.