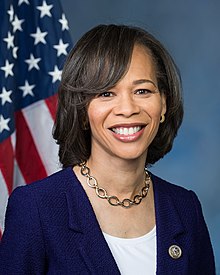 Lisa Blunt Rochester began her professional career as a problem-solver and an advocate. A caseworker for then-Congressman Tom Carper, Rochester helped people during challenging times with their Social Security benefits, disability insurance claims, IRS disputes and housing needs. She served in the cabinets of two Delaware governors as Delaware’s first African-American woman Secretary of Labor, and as Delaware’s first African-American Deputy Secretary of Health and Social Services and State Personnel Director. As Secretary of Labor,Rochester managed 500 employees and an $87 million budget; she focused on connecting employers to resources and jobseekers – particularly those on welfare or leaving Delaware prisons. She majored in International Relations as an undergraduate at Fairleigh Dickinson University and later earned a Master’s in Urban Affairs and Public Policy from the University of Delaware.