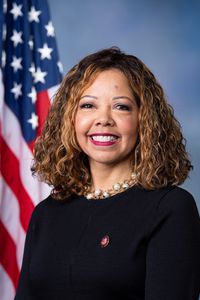 Lucy McBath left her 30-year career as a flight attendant at Delta Airlines to become the national spokesperson and faith and outreach leader for Everytown for Gun Safety and Moms Demand Action for Gun Sense in America. Her decision followed the shooting death of her son, Jordan Davis, who was killed by a man who complained about the “loud music” coming from the car in which Jordan was riding. After Jordan’s death, McBath dedicated her life to preventing other families from experiencing the same pain she did. Since taking her oath of office in January of 2019, McBath has sought bipartisan solutions to end gun violence, uplift small business and the economy, protect veterans, and lower the cost of health care and prescription drugs. McBath graduated from Virginia State University with a bachelor’s degree in political science in 1982.