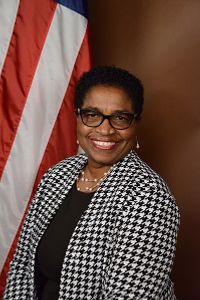 Marcia Ranglin-Vassell has been a high school English teacher in Rhode Island for the last 17 years. Prior to teaching in Providence, she taught in Kingston, Jamaica for four years. She decided to run for office when a young high school boy who played on her son’s high school basketball team was shot in the head and later died. “I knew Kip, he was a loving and joyous young man,” she says. “He was not a trouble maker. He was a new father and a promising young man.”