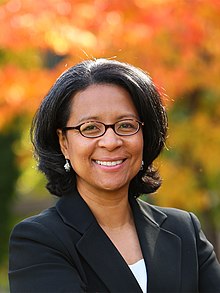 Marilyn Strickland is a former mayor of the City of Tacoma, Washington. She is the second African American and the first and Asian American elected to the city’s highest office. Strickland has a proven record of local and regional leadership and the ability to build broad-based coalitions that deliver results. She forged new ground in education, transportation, housing, job training and advocacy for small businesses. Under her leadership, Tacoma attracted over $1 billion worth of investment into housing, office and retail space; boosted high school graduation rates from 55% to 89%; and invested over $500 million in infrastructure. After eight years as mayor, Strickland left office and became president and CEO of the Seattle Metropolitan Chamber of Commerce. She earned a B.A. in Sociology from the University of Washington and earned an MBA from Clark-Atlanta University.