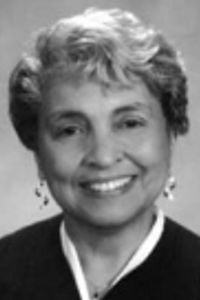 Mary McDade was appointed to the Peoria Public Library Board while raising her four children. She later became a member of the Board of Trustees of Eureka College, serving as chairman of the Board from 1980 to 1982. She worked actively in the areas of education, mental health, drug abuse, youth outreach, and civil rights. In 1981, at age 41, she enrolled in the University of Illinois College of Law, earning her J.D. in 1984. She was a law clerk for the Honorable Michael Mihm, United States District Judge for the Central District of Illinois from 1984-86. She joined the law firm of Quinn, Johnston, Henderson & Pretorius in Peoria in 1986, becoming a partner in the firm in 1991. McDade is the first African-American female elected to the Appellate Court outside of Cook County.