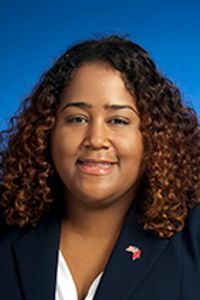 Raumesh Akbari is a former Democratic member of the Tennessee House of Representatives, representing District 91 from 2014 to 2018. She was first elected to in a special election on November 21, 2013. A business owner, she has served on several civic and community boards, including Emerge Tennessee and Democratic Women of Selby County. Akbari is a graduate of Saint Louis University School of Law, and in 2019 received the German Marshall Fund-Marshall Memorial Fellow, and in 2018 received the Barack Obama Award, Shelby County Young Democrat..