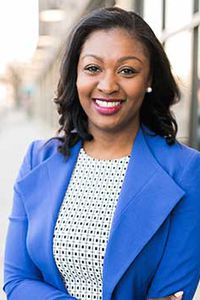 Sarah Anthony is serving her first full term representing the 68th House District, which encompasses part of the city of Lansing and Lansing Township. She currently serves as the Democratic Caucus Chair for the 2019-2020 session. Anthony was sworn into her partial term, making her the first African-American woman to serve in this capacity in Lansing’s history. Anthony attended Central Michigan University and earned a master’s degree from Western Michigan University, and was later named a fellow of the University of Michigan’s New Leadership Academy.

In 2012, Lansing residents elected her to the Ingham County Board of Commissioners, making her the youngest African American woman to serve in this capacity in the United States. During her time as a commissioner, Anthony served in many leadership positions, including chairing the Democratic Caucus and Finance Committee as well as serving as Chair and Vice Chair of the board. She has been a fearless leader for health care access, social justice, services for senior citizens and working families.