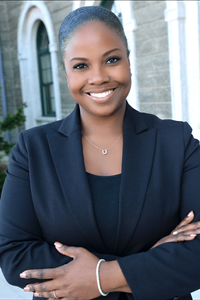 Taylor Darling (formerly Taylor Raynor) learned the game of chess around age 4. She and her sister, Sydney, became nationally ranked chess players who practiced and competed seven days a week. Darling credits the game for developing her strategic approach to problem solving. Darling attended Spelman at 16 years old and entered into a Clinical Psychology Doctoral Program, graduated from Hofstra University and became an Industrial Organizational Psychologist. Although she was in high demand in several industries to create and implement systems to increase efficiency, productivity and profits, the growing needs of her community caught her attention. Darling’s sister challenged her by saying “You get paid to fix things. Fix our community.”