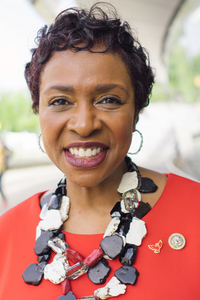 Yvette D. Clarke has dedicated herself to continuing the legacy of excellence established by the late Honorable Shirley Chisholm, the first Black woman and Caribbean American elected to Congress. In the 116th Congress, Congresswoman Clarke introduced landmark legislation, which passed in the House, the Dream and Promise Act (H.R. 6). This legislation would give 2.5 million DREAMers, temporary protected status and deferred enforcement departure recipients a clear pathway to citizenship. Clarke was first elected to the U.S. House in 2006. She represented New York’s 11th Congressional District from 2007 to 2013. Due to redistricting, Clarke was moved to New York’s 9th Congressional District in the 2012 election. Prior to her election to the U.S. House, Clarke was a member of the New York City Council from 2000 to 2007, and an executive assistant at the New York state Workers™ Compensation Board from 1992 to 1993.